Last week I was lucky enough to get a free last minute ticket to YOW West in Perth (big shout out to Mandy who made it happen 🤗). Unfortunately I couldn’t take the full 2 days off work, but I did get to see a few awesome talks and meet (or catch up with) some amazing and inspiring people. 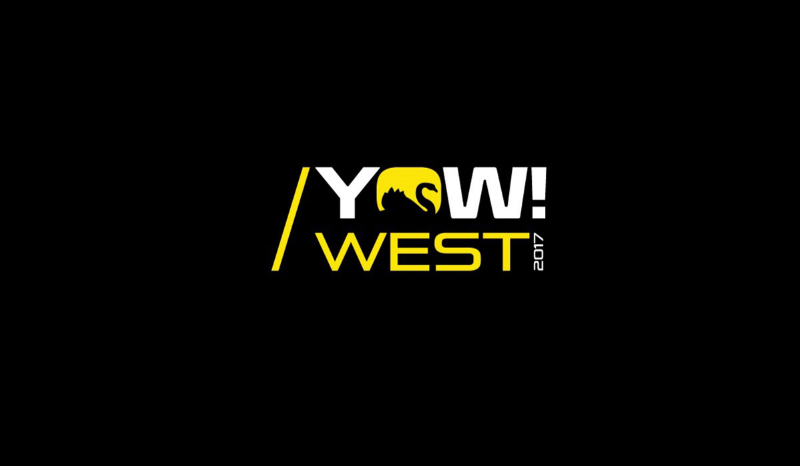 First up, I saw Ashley Aitken discussing the Extreme Lean Startup for Developers. It’s a concept I’ve heard a few times, and have been starting to look into, but it’s interesting hearing it from a developers’ perspective. The attitude towards startups has often been that they are small emerging businesses (“starting up”), and any approach taken when managing a startup should be different than when managing an existing business. 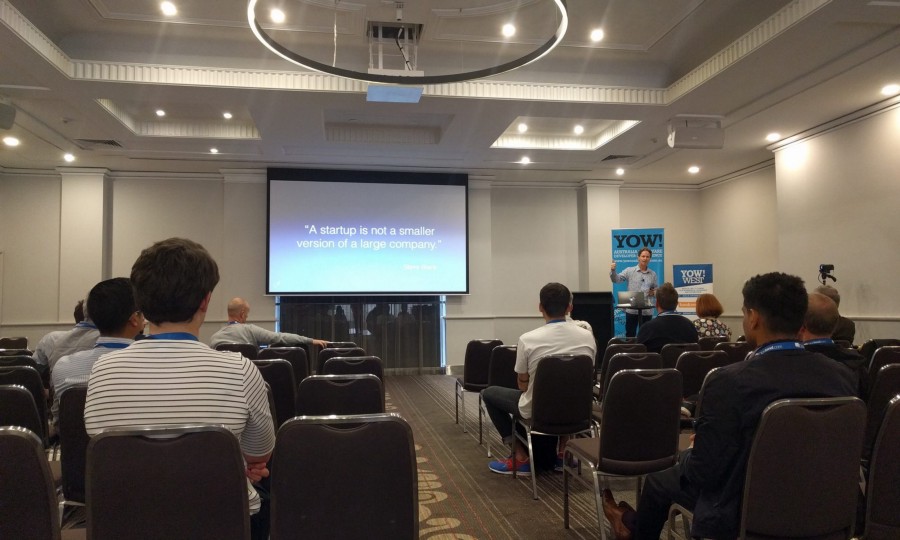 Although the approach taken in startups should be different from the one taken with large businesses, there are also things that larger organisations can learn from startups. The idea behind the Extreme Lean Startup, is to focus not on the product, the code, or even the logo; but instead to focus on the business plan. Without a working business plan, there’s no point in having the right logo, nicely formatted code or an innovative product.

This was an interesting (and quite valid) point and there was a lot to learn about how you can make sure your startup is a success (or implement in an existing business to give it a boost or revamp). Definitely a good learning experience, and hopefully I can implement a couple of things later on.

After hearing that Andy Clarke was going to be speaking at YOW, I was tempted to buy a ticket for that exact reason. I heard him speak at the inaugural Mixin conference last year as well as participate in his workshop and he still remains to be one of the inspiring people who reminds me why I love working in the web industry. 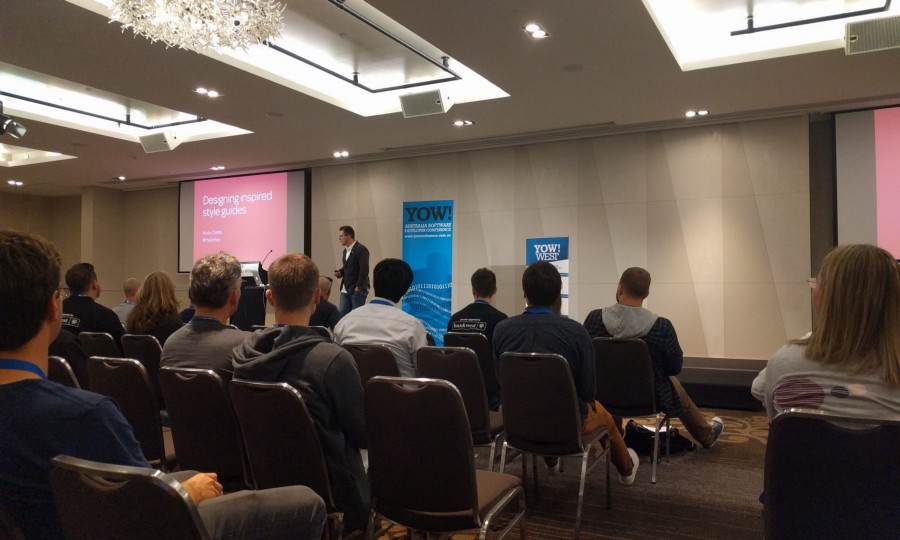 This time he was talking about designing inspiring style guides, and encouraging us to take advantage of the chance to make something beautiful. Most of the style guides we make are simply a document that dictates what colours to use, what fonts and the standard way to style a button. But rather than create a drab template document such as this, take the time to exercise your creativity and bring the styling into the guide itself.

Now as I’m a developer not a designer (my design ability spreads as far to knowing not to use pink and orange together), I didn’t get quite as much out of this talk as some of my creative friends might have. But once again, Andy didn’t fail to get me excited about the industry I work in (even if it did leave me feeling disappointed that I couldn’t use this).

For the second day, I headed off to a more technical talk and gave some support for local fender Jake Ginnivan who was discussing why modern TypeScript (aka TypeScript 2.0) was awesome and we could give it a second chance. Thankfully my rudimentary JavaScript knowledge meant that I wasn’t completely lost but for the most part it was a little (OK maybe a lot) beyond my experience.

I did get to take a little bit away from this talk though (and Jake did a great job in getting me excited about something I didn’t fully understand) so I will definitely be looking into TypeScript more if I find myself working more heavily with JavaScript. I also really enjoyed his examples as he showcased what TypeScript can do in the context of ordering coffee and beer in varying styles and sizes. 🍻☕

Although there are more and more talks discussing Accessibility, Ann Mwangi took a much more practical approach to the topic. With more and more organisations starting to take accessibility seriously, we need to keep other people in mind when both designing and developing websites so that everyone can get the same (or at least a similar) experience. 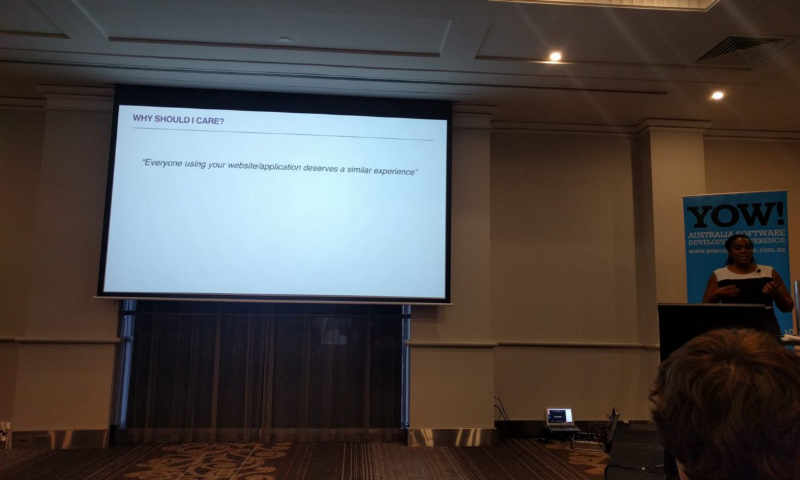 One of the top areas though of with accessibility (or at least how I explain it to people) is contrast. This is a super easy way to make sure that someone who has a visual impairment (such as colour-blindness) or even just someone who’s trying to look at their phone in the sun is able to see the content properly (Bankwest got themselves into some serious trouble with their company branding here, orange is super difficult to deal with.

Working with accessibility in mind, can also be something as simple as using the correct HTML elements when building your site. Screen readers recognise that particular elements work in certain ways, so know that a <button> is made to be clicked, but get confused by a

that’s styled to work as a button.

Lastly we delved into the world out remote/distributed/outsourced teams with Ted Tencza and learnt 5 mistakes we should all be making with distributed teams. With technology becoming more and more present in our everyday lives, we’re getting to the point where you work in a completely different location to the rest of your colleagues and not notice a difference compared to if you were working in the same room as them (except not having to smell when one of them has eggs and tuna for lunch). 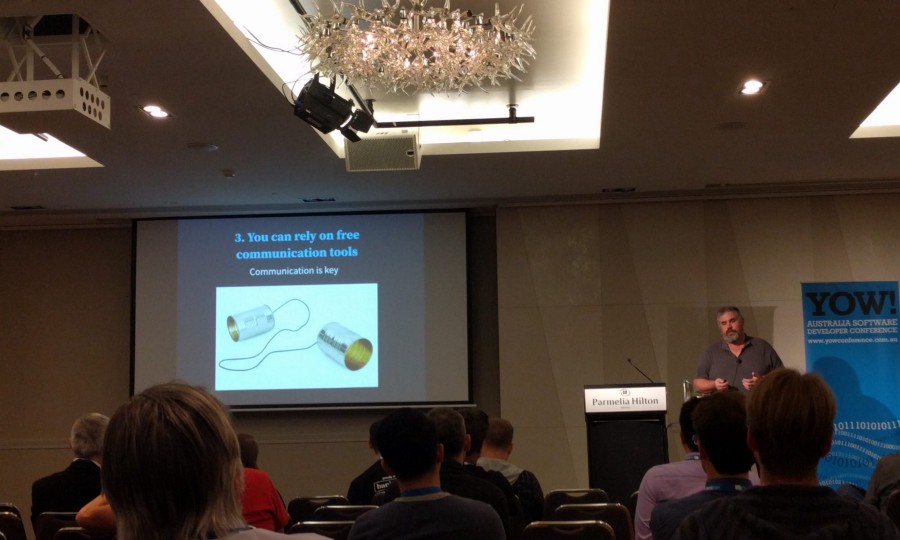 There is a lot of stigma around the “right” way to run a distributed team, and Ted did an excellent job at busting all the myths that a lot of people seem to be sticking to. Communication was a very big part of a few of the myths (it plays a very important role in all successful teams, local and otherwise) and thankfully the changes in technology today have assisted in bridging these gaps (although sometimes you need to be prepared to fork out a few dollars (or a few thousand) if you’re doing this on a bigger scale.

This was also a great chance to get rid of the impression that remote/outsourced teams should be used as an effort to cut costs. The ability to work from a remote location gives flexibility to both employers and employees and in a lot of locations has led to greater employee satisfaction and lower staff turnovers. If we can move past this stereotype, hopefully this will open up a wealth of opportunities for not only developers, but a range of other roles both in and out of the web industry.

It was great to see such a good turnout to support a local conference in Perth, sadly not too many of them stretch over this side of the country (and the turnout at www2017 left a little to be desired). It’s opportunities like these that we’d love to see more of in Perth to make it easier for local devs to attend (also Perth is a pretty amazing place to host a conference). Hopefully we’ll start to see a couple more expand to include Perth in their conference road-trip. Big thanks also to the team at YOW West who made this happen, you did an awesome job.

Back to Article Feed